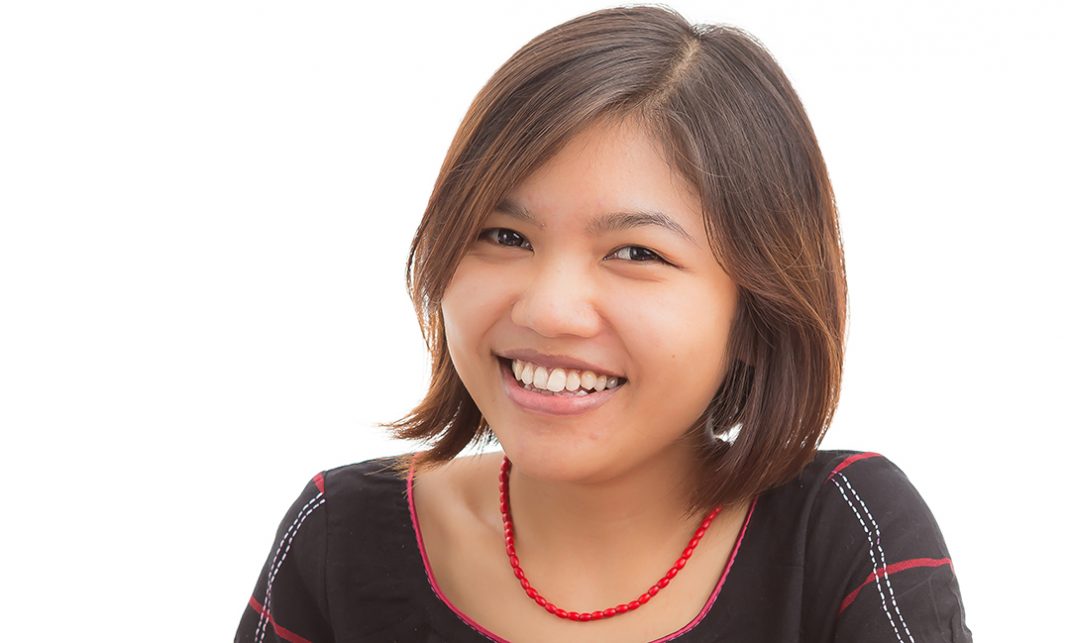 Mimi Wu sits down with Rosy for a lesson in Chin fabric patterns.

“I’ve always been interested in the patterns and colours of Chin fabrics since I was very young. I’ve seen my mother create new designs and work with weavers” – some of whom were relatives.

Cing Zeel Niang, who goes by Rosy, grew up in Chin State watching her mother run a Chin fabric business, which she credits as a subconscious inspiration to start her own business along the ame lines. Though it was hardly on her mind when she left her hometown for medical school in Mandalay, it crept into her life again when “me and my friends organized some cultural events, like cultural dances and a tribal fashion show. I think that was the beginning.”

In 2012, Rosy began working at a private hospital in Yangon, while simultaneously starting up her fabric business. “Eight months after starting the business, I quit the hospital job and focused on fabric.” Three months after that, she was married, and she is now expecting her first child.

With so much happening, her mother has been supremely helpful. “When we order the fabric from the weavers, we have to pick the patterns, and she’s way better than me at this selecting,” from weavers, who are hired to produce fabric from their repertoire of patterns. “My mum also has her own network and friends, so she helped me increase sales and identify weavers.”

We make changes in the patterns and colours. It normally takes one to three months to finish one new pattern of fabrics, and then we get ten pieces, which the weavers send by bus from Chin State to Yangon.

Originally, Rosy wanted to hire weavers full-time but found it more expensive “because to get all the different patterns, we needed to handpick or collect from many different suppliers. One group of weavers cannot produce so many different patterns at the one time, as it costs them money to hire a professional to change the pattern on their handlooms.”

Sixty percent of Rosy’s fabric stock is handpicked, while the remaining 40% is custom ordered.

“We make changes in the patterns and colours. It normally takes one to three months to finish one new pattern of fabrics, and then we get ten pieces, which the weavers send by bus from Chin State to Yangon.”

Chin fabric varies widely throughout the state. Rosy explained, “We need to start with the geographical differences. In Myanmar, there’s the northern part of Chin State and the southern Chin State, and the fabric is quite different. In the North, there are three different tribal groups: Hakha, Falam, and Dedim, and the patterns are quite different.”

Rosy, who is from Dedim in Northern Chin State, emphasises that due to geographical barriers, communication between northern and southern Chin people has historically been impossible, until today when it is still difficult. This has resulted in different designs. The North tends to produce ethnic designs that are simple and not particularly significant in meaning, according to Rosy.

“Southern patterns are also simple for daily wear, but when they weave a shawl, it is very good quality. The shawl is the size of a table runner. They are very unique and complicated. In the South, they don’t just use regular handlooms. There are two different handlooms: one with a bigger frame like a door, and the other that has a back strap and weavers have to sit.”

Beyond the northern and southern divide there is also a country divide. “There are some Chin people living on the Indian border or they live in Manipur in India. The design patterns are similar, but they produce high quality hand woven fabrics that are better than what we produce in Myanmar. So I try to get pieces from every region because I want to represent Chin State, not just northern or southern parts, but from every tribal group.”

Why Indians produce higher quality pieces is attributed to their more advanced weaving techniques and wider availability of raw materials. “In Myanmar, we have to get thread, and everything is made in China, and it makes quite a big difference. In India, the availability of different cottons makes a significant difference in the fabric making process. And, their creativity is more complicated, with more colors and more consistency in the patterns.”

Indians, she notes, are also willing to pay much more for fabric – up to $60 – than Myanmar people, not due to wealth, but due to preference. Myanmar, on the other hand, prefer thinner and cheaper fabrics with which to make longyis.

Rosy also walked me through the difference between Chin fabrics and other groups in Myanmar, beginning first with the choice of patterns.

“Chin fabrics have smaller patterns. In Kachin, the trademark is the diamond shape pattern, and for Karen, they will use lines on the bottom part of the longyi. Shan uses just lines, and then for Mon and Rakhine, they will use the cheik pattern, it’s kind of a floral pattern. The Burmese also use the cheik, but the Burmese style cheik and Rakhine style cheik are different.

“The thickness and pattern and the quality are quite different.  Once you buy medium range quality, like Chin, you can hand or machine wash it, and it will still last three or four years without changing color or shape.  But it’s not the same as others because they are made with thin cotton thread; the colors are fancy but fade quickly.  They won’t last more than one season.”

What to do once the fabrics are purchased?  Unsurprisingly, locals – primarily Burmese and Chin who have relocated to Yangon – sew longyis from the fabric.  Foreigners, “have so many different creative ideas to use the fabric as a cushion cover, table runner, screens, bags, and dresses.We don’t have an exact product line yet because we are still testing how to best use this fabric because there are so many types of qualities even in one Chin fabric.”

Rosy is compiling ideas and wants to launch products in a few years time, “It’s difficult to use the original ethnic designs to make products because, for example, one pattern is for Chin men only and even women are not allowed to use fabric for a top or longyi. But if I use the fabric for a bag or canvas shoes, I am still Chin, and I will be blamed. I don’t want to change the uniqueness or rules of the tradition.”

Rosy now takes international orders from the many Chin and Burmese who live abroad but still wear ethnic clothing.  This makes up 50% to 70% of her profits.  Working with her are two women who resell the fabric in Malaysia and the US, and she has arranged to make Burmese school bags with Chin fabric to sell in the US.  “I have sent samples to [the buyer], and she’s still in the process of which fabric and which pattern to order for 50 bags.”

With few importers of Chin fabric to central Myanmar and abroad, Rosy is carving out a space for herself among local and foreign customers, who use the fabrics in dramatically varied ways.