MYANMOREThe Ultimate Guide to What's On
More
Home Articles A Better Tomorrow, One Soybean at a Time 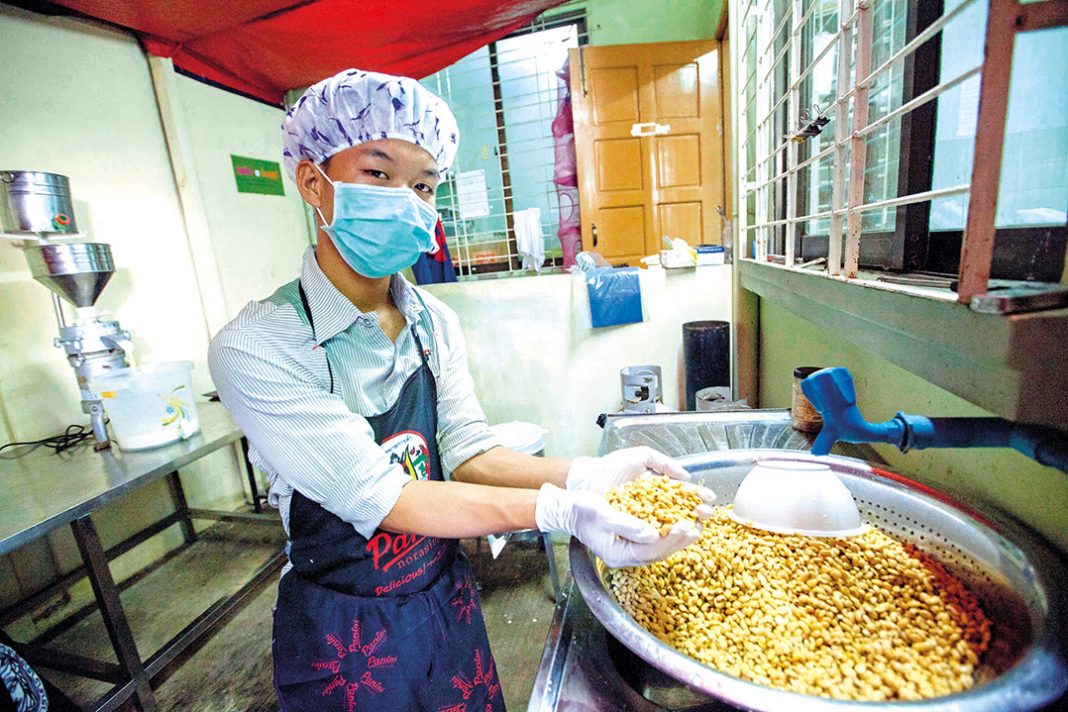 Plunked down before me was a bottle of cool, creamy soymilk produced by SoyAi.  Its pink wraparound sleeve read in handwritten font, “My name is _____ and I want a better tomorrow!”

That afternoon, I sat with Eileen Lui, who co-founded SoyAi, and Khun Kyaw Oh and Tun Han Kyaw, two boys burgeoning on adulthood who helped develop and now run the business. Their interest is extremely personal: both have grown up at orphanages, and they seek a better future for themselves and their brothers and sisters at the homes.

They wanted to carve a path towards self-sufficient adulthood for the Children of Tomorrow – all the children living at the three orphanages.

SoyAi is a social enterprise producing and selling soymilk and tofu in Yangon. Run by underprivileged youth with love (hence ‘ai’, meaning love in Chinese) and determination to help other underprivileged youth, the business can deliver up to 1,000 bottles of soymilk per week. Clients currently include City Express, 999 Shan Noodle House, Yangon Bakehouse, Thut Ti Lethwei Boxing School, and patrons of Marketplace’s Weekend Bazaar. On Sundays, soymilk is sold by bicycle at Inya Lake.

The company began with Eileen, who arrived in Yangon in 2012 with her husband after volunteering at an HIV orphanage in Cambodia for five years. “I was involved in creating recreational activities for the kids. We came here and wanted to do the same thing. We found a home with 26 kids and provided food and daily necessities. After three months, the caretaker asked us to look at two other homes: 200 kids at a monastery, the building was crumbling, the kids had no new clothes and were developing skin rashes. The second home was getting evicted. I sent an SOS home [to Malaysia] to say, ‘Hey, we need help.’”

The couple received a big response: kilograms upon kilograms of clothes and dry rations and enough money to pay rent. Each weekend and still to this day, all three orphanages gathered together to learn music, art and English.

Many orphans supported by Eileen, including Khun Kyaw Oh and Tun Han Kyaw, are Pa’O from Shan State. There, drugs, war, and poverty drove parents to send their children to Yangon in hopes of improved lives.

It’s their choice; we say you either make a difference or not. The door is always open.”

While financially supporting the homes every month and volunteering on weekends has been rewarding, Eileen and her husband wanted to do more. They wanted to carve a path towards self-sufficient adulthood for the Children of Tomorrow – all the children living at the three orphanages.

“We noticed that something was not right. Boys age 18 weren’t working. After September 2013, we announced to all the homes, ‘We’re going to be here to help, but we’re going be help in different ways. We’re going to teach you how to fish.’  We got the adult orphans job placements and internships.”

The duo also found a machine that produced both soymilk and tofu. They took a dive and purchased it despite having no prior knowledge of the soy business. Initially, seven older boys joined the project, which kicked off in January 2014, though only three of the original pioneers remain to operate SoyAi.

“It was such an uphill climb,” lamented Eileen. “We can’t blame them because they’re not known to face adversity of working when it comes tougher. It’s easier to return to monastic life where they didn’t have to do much, but they have food and shelter. It’s their choice; we say you either make a difference or not. The door is always open.”

What made it tough was that the boys not only received training on soy milk and tofu production, “but we also had to train them on business aspects: stock keeping, accounting, marketing, sales. It was a really steep learning curve for us. Most of them are not educated because of the environment they were in before and the background they were raised.”

Even those who are educated struggle. Tun Han Kyaw worked diligently in high school and by no small feat, he earned a university placement. Though economics was his first choice, it was ultimately too expensive, and he instead graduated with a degree in industrial chemistry. Yet despite his education, he has found it difficult to land a job; his reserved nature has sabotaged his interviews. Selling soymilk has helped him build his confidence.

Khun Kyaw Oh agreed, “With SoyAi, I gained more experience in sales, marketing, management, leadership, and how to talk to and how to take care of customers.”

Tun Han Kyaw and Khun Kyaw Oh have developed SoyAi for the last 18 months, but they will soon depart to make way for a new cohort, who will gain business acumen during a one-year training program meant to assimilate them to the real world. Eileen hopes this model will ensure SoyAi’s sustainability.

“They will have until December to learn as much as they can and try as much as they can. They will face three options: One, they start their own business to see what they can do, and we help to start it up; two, they go into the work force with a little more experience and stronger CV; or three, they can further their learning whether it be other vocational training or whatever that may be.”

Eileen takes a tough love approach, “I tell them, ‘When you get out in December, I’m not going to be there to hold your hand.’” but also motivates the boys in the face of rejection or criticism of the product.

“There are difficult customers,” said Khun Kyaw Oh. “They will complain that the milk doesn’t taste good or the bottle is ugly. So during that time, I feel a little upset, and I don’t know what to say.” Now, he views criticisms as learning opportunities. “I retain what the customer says. I realise I should really think about the bottle design. If customer complains about the taste, let’s take a look to improve it.”

In addition to retail sales, the budding entrepreneurs developed the Feed Myanmar Programme, where individuals or companies buy soymilk to donate to any orphanage of their choice. The donation supports orphans’ nutritional needs, while simultaneously conferring good will onto individuals, who typically donate during their birthday, and positive marketing for companies.

Profits from the soymilk are returned to the business and orphanages: 30% provide tuition fees, clothes, and food to the Children of Tomorrow; 30% is invested to grow the business; 30% goes back into the development of the SoyAi trainees through English and computer classes; and 10% is shared amongst the boys operating SoyAi.

“One reason why we’re so willing to help [the SoyAi boys] is because they have hearts of gold,” said Eileen. “One thing that’s attracting them to the project is it’s helping people like them. If they sell a little above their target, they’ll do a lunch for the kids.  I think that’s a point of pride. They have to sell thousands of bottles to make that money.”

Indeed, “sharing donations,via the Feed Myanmar Programme, and helping children to be healthy” are two of Tun Han Kyaw’s proudest accomplishments with SoyAi to date.

Additionally, changing the perception of what orphans can achieve has been important. Khun Kyaw Oh shared, “We have hands, we have legs, we are trying for ourselves. We are not asking people to donate, we are just asking people to buy.”

After December, Khun Kyaw Oh wants to “work in another country. I want to see what other countries do. I want to learn more like about sales.”