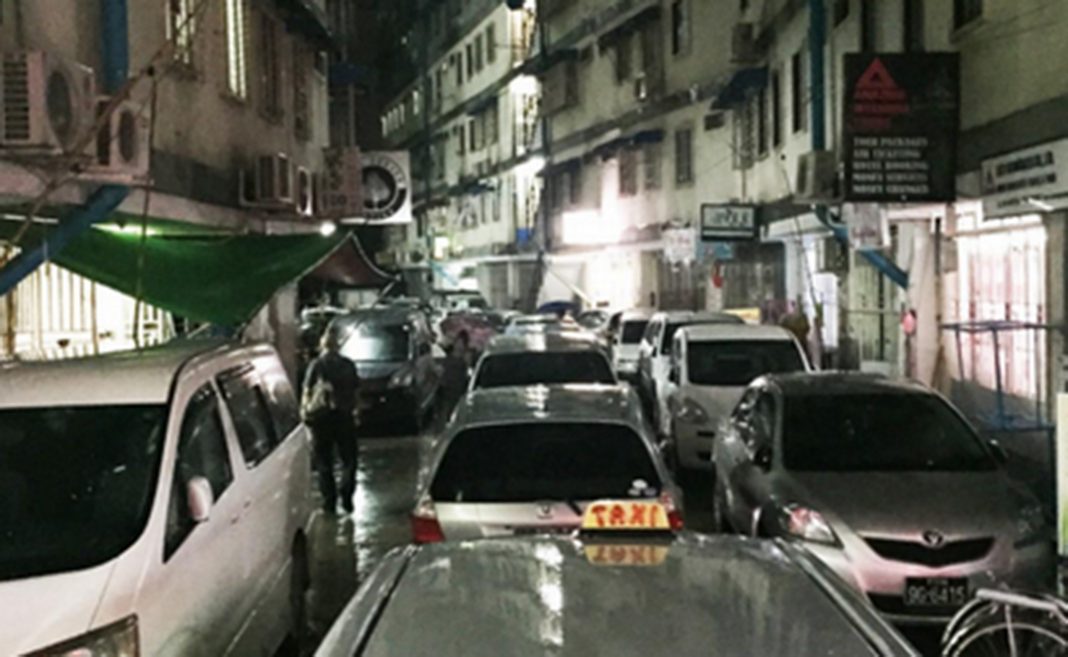 Richie Chan takes a close examination of the use of space at the Muditar Condominium from a designer’s point of view.


Introduction
The concept of streets in a city’s context typically associates with notions of general publicness, porosity and accessibility. Any individual or group, regardless of background or origin of departure, is entitled to use the streets – at all times and at free will – to roam about, interact and assemble with others or simply fulfil an agenda. These streets are non-discriminative and inclusive. Streets are also hierarchical: main or primary streets support higher volumes of traffic and commerce, while side or secondary streets tend to be considerably quieter and are often for residential use. The best streets are legible and identifiable, attributed largely to distinctive street features, and profiles and types of buildings flanking on both sides. Streets make up the city’s fabric and structure and are capable of creating locales (the concept of genius loci, or sense of place).

Yet there are streets in Yangon that challenge such notions and overturn common perceptions – as in the case of Muditar Condominium 1 (located along Baho Road, in a residential quarter in Insein Township; not to be confused with Estate 2 located elsewhere). The condominium is designed with two internal lanes that end with cul-de-sacs, lined and flanked by three monolithic linear residential blocks (it is easy to imagine the estate layout). In general, condominiums with commercial quotas are common; condominiums that distribute the quotas by designing internal streets, or public thoroughfares (as opposed to multiple split levels within the same building footprint) are few and far between, with the exception of mega-scale developments where thoroughfares are encouraged for connectivity within the huge premises. If the city’s streets are “public-public”, streets within gated communities may be defined and demarcated as “private-public”, as they are intrinsically intended to serve exclusively for their residents. Yet in Muditar, thresholds are observed to have been crossed; the qualities and use of street spaces have treaded along ambiguities are reterritorialization. This article sheds some light into some serendipitous findings found in what appears to be just ordinary streets.

Understanding the characteristics of Muditar’s street blocks and streets
In Muditar, the three towering 9-storey high blocks dwarf almost everything else in-between and in the foreground, unmistakably prominent and imposing. The blocks wear a convincingly time-warped character, made by stains, deposits, moss, filth, delamination and patina on surfaces likely caused by weathering, neglect and cultural attitudes of the community. It is hard to imagine Muditar is only three years into its occupancy, according to a local taxi driver’s account on its construction. Its seemingly accelerated state of near deterioration in such a short span of time leaves on in bewilderment. But despite the scratchy surfaces, the architecture is modern in its 1920s-30s international style without any references to traditional Burmese elements, and is fundamentally conceptualized around ideas of functionality, natural lighting and cross ventilation. Vertical circulations from ground level up through lift lobbies and steep concrete stairs designed at their facades constantly throw back views onto the internal streets below, as streets look up to occasional circulatory spectacles.

On every residential floor, the corridors appear ironically, often dark and gloomy, and have a tunnelling effect, that connect both ends of the block. The corridors access into standard 2-bedroom apartments. The facades are distinguishable by individual crescent-shaped metal awnings, a majority of them in cerulean blue, assigned in an orderly fashion for every window that looks out into the streets. The facades too, are dressed by similarly coloured satellite dishes (and other discernible objects) that dot and spawn sporadically in a seemingly random and haphazard manner, their round profiles echo the awnings’ language – almost like scenes of a parasitic empire of mushrooms grown (gone) wild. It is a sight to behold – as the facades are constantly dynamic and represent dominant expressions and signifiers of life.

The haphazardness on the facades continues onto the two internal streets, one clearly appearing busier than the other as its mouth faces directly the property gates into Baho Road. The streets are relatively narrow, about 8-9 m wide, 100 m long, barely enough to squeeze three cars through, have no side pavements, only flushed concrete drain slabs. The hard edges of the streets are defined by canopies and concrete steps that lead up to the shop units and steep curbs (presumably to also address flooding concerns). More often than not, the hard edges become indistinguishable by the changing streetscape and soft edges of transient street peddlers, boys playing sepak takraw, mobile furniture, shop spill-overs, delivery wagons of goods (and rubbish), and as expected – all kinds of objects imaginable that would “reserve” car parking spaces (lot markers are absent). The streets sustain a range of commercial activities – amongst others, a clinic and pharmacy, a video rental shop, a textile design and manufacturing shop, an internet and gaming centre, laundry services, cafes, a bakery, family-run restaurants, convenience and sundry stores, provision shops, an architect’s office, a real estate company, stationery and printing shops, fashion shops, hair and beauty services and a travel agency. The owners of the establishments and their clientele base are telling of the diverse mix of demographic groups. Besides locals, there are also other Asian and Western minority expats who are likely residents of Muditar. Not surprising, the staff of some establishments like the sales assistant in the Korean-run bakery has multi-linguistic abilities – she speaks fluent Korean and Burmese, conversant English and has begun ten months of self-taught mastering Mandarin. The atmosphere of the streets is always lively and sensational, especially during weekends, brought about animated neon-lit signboards, straying people and animals, and the scenes and sounds of transitions, transportations, conversations and commercial activities.

Street crisis: parking
With peak hours (and now almost every hour of the day) come peaks of frustration for drivers trying to manoeuvre their way through public roads and streets in traffic-congested Yangon; the feelings ease upon entry into private property. Muditar’s driving and parking scene however unabashedly takes on a whole new level. It is a crisis, a nightmare of nightmares. It needs more than just resourcefulness, stroke of luck, skill, strategy and patience with errant drivers; it needs stamina and courage. The property gates are almost always the reception of traffic wars. In the streets, delivery trucks are given priorities; taxi drivers who know the premises are afraid to pass through the streets again – no exception sometimes even for the passenger carrying bulky items or many a grocery; drivers who are not familiar with the estate delight after finally managing to get through the streets, only to frown in dismay as the infinitely deep and far-in cul-de-sacs come into sight (the only way out is to reverse!); the permanent resident drivers are the ones who feel exasperated the most as they desperately find a lot on the sides of the street – as time is ticking – to rest their vehicles.

When faith is lost, the drivers settle for an in-between, parked behind another vehicle in the middle of the street and surrender their contact numbers (and sometimes addresses) on the dashboards. The night scene of Muditar ends with a grid-lock. The next working day, as early as 6 am, the ‘first’ driver at the cul-de-sac end needs to head off to work, gasps in horror at the numbers he has to call. The early birds, including shop owners who have just opened, and the 24-hour security guards, render their assistance. The sounds of car horns would pierce through the morning silence and their echoes would amplify and extend in the street space. According to a local resident, it takes a good 30-45 minutes to exit the streets. Residents are sure of a reliable yet annoying alarm clock that never seems to stop.

“Superstreets”: of contestations and interactions
In Muditar, the concept of a gated community and “private-public” streets will remain contested. Because the main gates are never closed, the internal streets are shared with the outside streets. They will continue to be reterritorialized and permanently part of the regional street network and flows of space. They will continue to be another shopping destination that can be accessed by anyone. The automobile will continue to overwhelm the internal streets and frequent contestations of ownership, authority and right of way will persist. Finding a parking lot will remain as challenging as it will be to predict power outages. Unless long-term mutual agreements are arranged, shop owners generally will not welcome transient hawkers or vehicular obstructions at their shop fronts.

The events on Muditar’s streets are the result of life’s circumstances thrown at the owners, residents and visitors. Consequently, the ugly, vulnerable and beautiful sides of human nature inevitably come into display. On the one hand, tensions and displeasures arise out of conflicts in the sharing of street space; on the other hand, assurance and compromises also arise out of conflicts in the form of negotiations. There is the fostering of community spirit and relationships – and a language – both spoken and unspoken – made by the rules and how things work around in Muditar. As Jane Jacobs, the prolific writer and urbanist, aptly puts, with her extensive writing on the “eyes on the street” concept, ‘interactions among the people who live and work on a particular street can reduce crime, encourage the exchange of ideas, and generally make the world a better place’. A better place indeed for Muditar where even though frustrations are here to stay, no one can disagree on the imperfections of the streets that bring out the brilliance and unity of the community to devise innovations and share beautiful moments that make everyone’s lives a little easier. Whether internal or not, the streets will serve as catalysts to the community’s prosperity and culture and gradually operate as sites for nostalgia and cultural memory. Whether lanes shall become streets over time, or streets shall be made out of lanes; whether streets shall be “public-public” or “private-public”; whether shop use shall be pure or hybrid, Muditar’s streets are proof of what could potentially become “superstreets”.