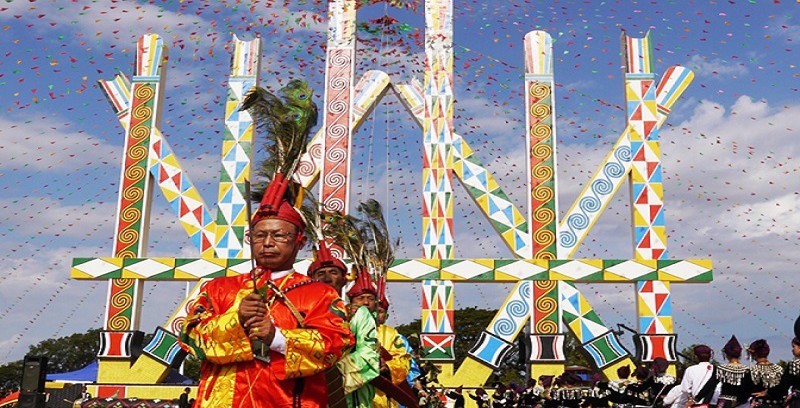 In early January Heinz Willems travelled to Myitkyina for the Kachin Manau festival, which was to be held for the first time in four years.

Myitkyina is the capital of the northern Kachin State of Myanmar. In Myanmar language it means ‘near the big river’, and Myitkyina is on the west bank of the Ayeyarwady River, just 40 kms south of the confluence (Myitsone in Myanmar language) of its two headstreams (the Malikha and Maykha rivers). It is the site of the controversial Myitsone Dam, construction of which was suspended in 2011 due to significant ecological and sociological concerns as well as negative public opinion on the project. Myanmar people regard the Ayeyarwady River as the birthplace of Myanmar civilisation and its confluence point has a special significance.

The majority of the state’s 1.2 million inhabitants are ethnic Kachin. The term Kachin includes a variety of different linguistic groups with overlapping territories and integrated social structures. These are notably the Rawang, the Lisu, the Zaiwa, the Lashi/Lachik, the Lawngwaw and primarily the Jingpo/Jinghpaw, who are also found in neighbouring Yunnan Province of China and the Indian state of Arunachal Pradesh.

From the late 19th Century, Christian missionaries (mainly Roman Catholic and Baptist) arrived in Kachin and started converting the local population, which was practising animism until then. Today more than half of the Kachin people identify themselves as Christians. There are a number of churches scattered around Myitkyina but it is in the surrounding region that they are most noticeable, their anachronistic towers rising above the surrounding mostly wood and bamboo houses.

Myitkyina itself is a very sleepy town, stretching along the riverside. While the town itself lies in a large flat valley, mountains can be seen all around in the distance. Most of the buildings are less than four stories tall, with only the occasional apartment building or hotel rising higher. Beautiful massive old trees are dotted around town and certain streets are lined with them. The streets are neat, with wider ones having a green median strip. They bustle with cars, three-wheelers (which are the common form of taxis here) and motorbikes.

The town centre is marked by the sprawling warehouse-like structure of the market, close to the riverside. All around it are street vendors that cover the road in the evening. Walking through some wooden stalls, one suddenly comes out at the riverside. This being the dry season, the water is far below, with a wide stretch of sand leading to it. In the distance you can just see the uppermost bridge of Ayeyarwady, which connects to the Mandalay highway. Opposite the market, by the riverside, is a shiny, golden Buddhist temple and just a hundred metres further on is a similarly shiny Hindu temple. The religious diversity of the town is further illustrated by a number of mosques and a Sikh temple.

There are some nice riverside restaurants in Myitkyina. Just across from the market is Riverview, a drab wooden structure with a wonderful view over the river, as anticipated by the name. They offer the standard beer station barbeque cum Chinese fare but also do reasonable dim sum in the mornings. The other notable riverside venue is much more popular with the youth. Called Kiss Me, it doesn’t serve alcohol, being just next to a temple, but does have great coffee, juices and shakes and also does a wide range of food, including sandwiches, waffles and an excellent banana roll. For a more western ambience, Pizza Korner (sic) is a relatively new place, spread across a large wooden terrace. Jinghpaw Thu offers the best Kachin traditional dishes, which are quite spicy. They are much less oily than typical Myanmar dishes, often served wrapped in a banana leaf and a speciality is the ‘pounded dishes’. These can be made with meat or fish which are literally pounded into mash with chilli, herbs and spices, and is delicious with some rice.

The Manau Festival is the most important cultural event for Kachin people, and has its origins in spirit worship. It is celebrated at a special venue, marked with a 12-pillar structure of which each element has special significance. The Manau dance is performed by two groups, in a kind of line dance around the central structure, following a hypnotic beat of drums and gongs. Every dance lasts about three hours and is performed twice a day for five days.

The last time the Manau festival was held in Kachin State was in 2011. It was halted thereafter when a 17-ceasefire ended between government forces and the Kachin Independence Organisation (KIO). This year there was some controversy about the government decision to stage the festival despite ongoing clashes in the region and apparently the number of people attending was much smaller than previously. Nevertheless, the number of people are larger every day and there were especially big crowds on the main day.

I went to the festival park on the edge of the town several times over three days. It’s a big park with the circular dance ground in the centre. All around were stalls selling various things from food, traditional medicines and handicrafts, to jade and massive teak tables. There were also a couple of stages on different sides where music performances and a beauty contest were held in the evenings. Basically it was a funfair atmosphere.

There were very few foreigners and we were given VIP treatment. Local English-speaking students volunteered as guides, and at lunchtime we were given food and drink, including traditional rice wine, drunk out of a bamboo stem. During the dances we could wander around the dance ground at will, while most of the audience had to stay around the edge. We could thus get very good close-up photos of the action.

The music itself is quite repetitive, seemingly consisting of no more than four distinct songs, but the hypnotic beat drives the dancers on. Members of the audience are free to join in the later stages of the dance and as a foreigner one is especially welcomed. Joining the line one can feel the energy and joyful spirit of the people, both young and old. Most are smiling and clearly having a great time. The men hold up and wave their ceremonial swords while the women move their hands in graceful circular motions. Others are doing their own kind of jig.

The dance leaders follow markings on the ground, and the line snakes its way around the central pillars, sometimes forming parallel lines, sometimes closing in on itself in a spiral. There are ‘supervisors’ who make sure that the dancers follow the lines and don’t get tangled up.

The leaders of the groups wear long robes with headdresses of hornbill and peacock feathers or tusks of wild boar. People wear beautifully embroidered traditional costumes with the colours red and black dominating. Some additionally have elaborate silver ornaments around their necks that jingle during dancing.

On the afternoon of the last day, the dance goes on well beyond three hours. I join in for the last hour or so, as the line of people winds its way around the pillars. The dance steps are essentially slight squats and after some time the thigh muscles start to ache. I can’t imagine how those that have been dancing for six hours daily over the last few days feel. Finally we move toward the exit and do several loops as the long line of dancers files off the dance ground.

Overall it was a fantastic event and I feel very lucky to have witnessed it.