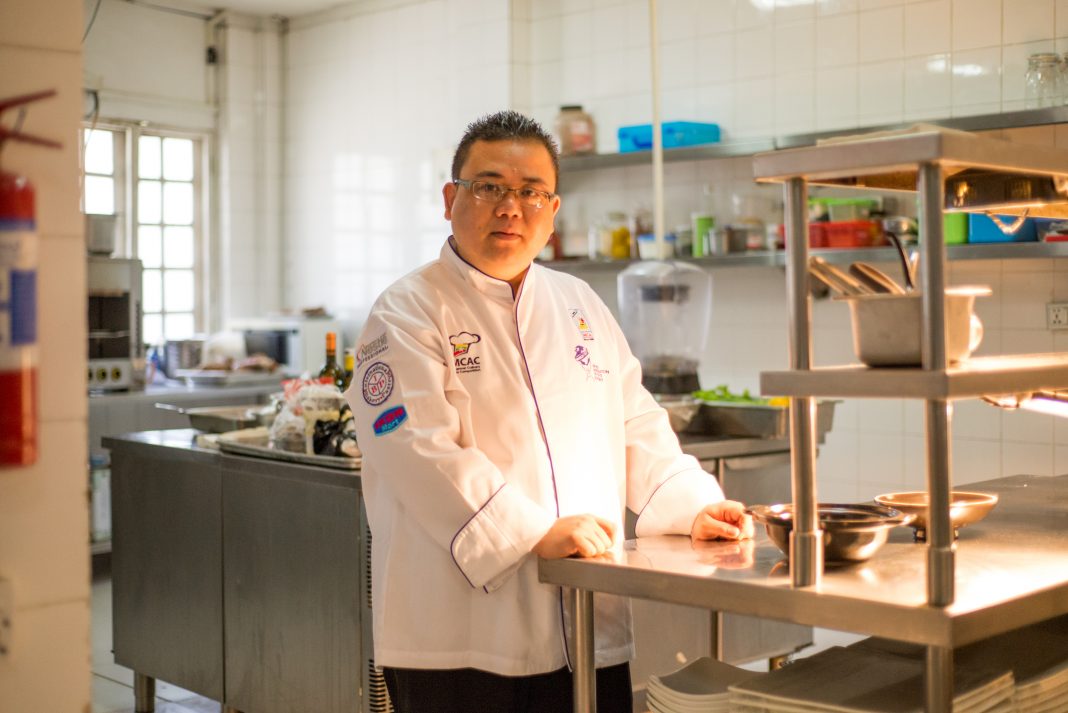 From roasting camels for thousands of hungry guests, to honing his skills in five star hotels throughout Dubai, topped off with becoming an Ambassador for World Chef’s Without Borders, at 33 years old Thurein Htun has lived a colourful life in the culinary world. Back in his native city of Yangon, he hopes to nurture a budding community of local chefs through sharing his passion for cooking and valuable experiences of working abroad.

At 18-years-old Thurein Htun’s uncle offered up to him three career choices – computing, cooking, or learning English. He chose the kitchen. With his uncle’s financial support, Thurein Htun turned his hobby into a passion as he embarked on a three-month training course at Kandawgyi Palace Hotel.

Interestingly, I actually had aspirations of becoming a lawyer,’ he recalls. ‘My uncle came to me with his offer whilst I was in my year’s gap between high school and university which is compulsory in Myanmar.’

A career in cooking for the teenage Thurein Htun was an opportunity to do what he enjoyed, but most importantly it laid out an avenue for him to explore his dreams of travelling abroad.

At Kandawgyi Palace Hotel, where he was immersed in the foreign world of French cuisine, he met teachers U Khin Maung Lat and U Myat Min – men he continues to credit for being his main inspirations.‘U Khin Maung Lat and U Myat Min inspired me in different ways but both drove my passion for cooking and travel. Without them I may have still returned to study law. U Khin Maung Lat was my mentor; he showed me the importance of having a positive, professional, no-nonsense attitude in the kitchen. The chef is the commander. Whereas, U Myat Min, who became more like a confident, wowed me with his English accent which was nearly perfect for not being a native English speaker. And then I knew I must travel.’

Some 5,000 miles is what separated a young man from Yangon’s Ahlon Township from his dream destination, Europe.

While he did not venture to the likes of Spain or Italy, great success abroad soon called, when in 2008 he landed nearly 3,000 miles away in Dubai where he would spend the next five and a half years.

Fiercely independent and focused on success, Thurein Htun immersed himself in this alien world of new systems and foreign languages.

Rapidly progressing through the ranks of Dubai’s glittering five-star hotels from commis 3 at the One & Only Royal Mirage to Chef de Partie at the Westin Dubai Mina Seyahi Beach Resort, more than satisfied his teenage ambition.

Career highs in Dubai include being awarded a certificate for excellence by former Argentinean footballer Hugo Maradona – brother of legendary player Diego Maradona, and being part of the team that landed Westin Beach Resort the Timeout platinum prize for Best Brunch in 2013.

It was at Westin’s legendary Bubbalicious Friday brunch feasts that Thurein Htun was introduced to the craft behind tenderising and roasting camels – two or three of which were served to up to 12,000 guests in one brunch sitting. An experience not all chefs can lay claim to.

‘I’m glad I followed my head and my heart all those years ago. My time in Dubai was incredibly valuable. Aside from the accolades, my English improved, I worked with some of the best in the business, cooked for thousands in one sitting, mastered hundreds of delicious dishes from across the globe and became fully trained in the highest level of sanitation and hygiene standards – skills I can take anywhere.’

Although, undoubtedly it was one of the best periods in his adult life, he couldn’t shake off the persistent homesickness. And love was what eventually brought Thurein Htun back to his native Yangon with a fiancé in waiting – a fiancée who has now become his wife.

Home in Yangon, and laden with a barrel full of culinary skills, management practices and industry knowledge, Thurein Htun became inspired to share his experiences with his local community – with a particular focus on the young and disadvantaged.

He can currently be found juggling his professional duties as Chef De Cuisine for Le Bistrot of the luxurious Savoy Hotel. with his community outreach work as an Ambassador for World Chefs Without Borders (WCWB) – the aid and charity arm of World Chefs.

Becoming an Ambassador for WCWB in 2014 has given him the opportunity to concentrate on helping his local community. In February, with a team including Norwegian Michelin Star Chef Markus P Dybwad, Myanmar TV Chef Kyaw Kyaw and many other key industry figures, he visited the Hnit Aung San correction centre in Kawmu, which is home to 450 boys who were orphaned in the aftermath of Cyclone Nargis.

‘It was important for us to teach the boys something they could use themselves one day. Yes. we plated up delicious four course meals that they loved, but we also got them involved in helping with preparations and showed them the cooking process from scratch. We hope that this fun, practical approach has inspired them to become chefs themselves one day. The restaurant industry in Yangon is booming so there are many opportunities for them to go on to lead prosperous and independent lives despite their current hardship.’

Not only is Thurein Htun an Ambassador for WCWB, he is also a Co-Founder of the Young Myanmar Chefs Association (YMCA) and an organising committee member of Myanmar Culinary Arts Competition (MCAC).

His charitable nature has also seen him involved in working with the Girls Pastry Vocational Training Center for over 100 street kids. With this capacity building initiative it is also hoped that by giving these disadvantaged girls training and working experience, they will be valuable to Myanmar’s fast growing hospitality industry.

Selfless acts for others aside, Thurein Htun remains on top of his game when it comes to culinary excellence and is a strong team player. In a pool of 218 chefs, his team brought home the Bronze medal in 2014’s ThaiFex Me Khong River Challenge – the biggest culinary competition in Southeast Asia.

From being a boy of ten years old, standing in the kitchen of his childhood home in Ahlon frying up an egg curry for him and his father whilst his mother and sister were away, Thurein has certainly come a long way.

He hopes to refine the art of staff management and has his appetite set on becoming an Executive Chef – a position in which he can share his experiences and pass on the importance of a having good attitude with talented junior chefs who share his passion.

There is no doubt that Thurein Htun’s passion for cooking will drive him to win more professional accolades. His passion, combined with his innate warmth, will see him continue on his path of working with charities, not only changing the lives of individuals but also that of the greater community at a time when the world is watching.