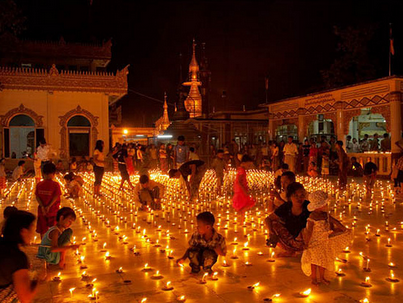 Thadingyut Lighting Festival is one of the most adorable and meaningful festivals in Myanmar as a nation that has rich Buddhism practice and culture. It is celebrated in the second or third week of October as a sign and remembrance of welcoming back Buddha’s and his disciples’ coming back to earth after preaching “Abhidhamma”- the highest doctrine of Buddhism- to his previous life mother in heaven.

The festival is in the seventh month of Burmese Calendar. For the year 2013, Full Moon Day of Thadingyut is on 19 October. Every Buddhist in Myanmar lights up colorful candles, hangs decorated balloons or colorful bulbs in front of each house and celebrates the festival nationwide.  Monasteries, pagodas, houses, streets are lively with candle fires. Perhaps, children are the ones who are really delighted because they are given more or less than ten-day holidays and pocket money.

Nowadays, it’s essence of beauty lies in the way Buddhists do. Children, youths and all ages give homage and presents to the elders and ask for forgiveness if they have done wrong. In return, the elders forgive them and bless them. Most of the elders and Buddhists go to monasteries and pagodas to do merit, show good deeds and pray.

There is no doubt that on the day of the festival, most of the religious places in nationwide, especially Shwedagon Pagoda  will be over crowded with pilgrims who struggle to light up candles, change flowers in the vases and make donations. Therefore, it’s the best opportunity for expats to participate in Thadingyut festival at Shwedagon Pagoda on 18th October and 19th October, where you will see different kind of ages clasping their hands, kneeling down in front of each Buddha statue and respective planetary corner such as Jupiter and learn the beautiful tradition of Myanmar under the cool breeze of the evening.