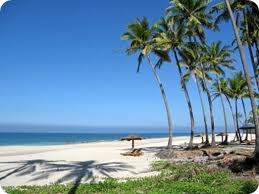 Time for a break

Crowds of people, dangerously uneven pavements, and a dusty heat. Let’s face it; despite Yangon being the biggest city in Myanmar it might not be the most interesting after a while and the urge for a weekend get-away will hit you. A sudden need to travel, to experience something new, and to see different scenery should be fulfilled because Myanmar has much to offer, even within reachable distance from Yangon.
If you are looking for entirely new surroundings, maybe a place with a calm and laidback atmosphere, the place to go is Ngwe Saung beach. It is not your average backpacker-budget place, though; I do categorize it as an affordable get-away. After six hours of rather stomach-turning bus ride the destination brings you a paradise-like feeling. There is soft sand under your feet and coolness in the blue water in the heat of the shining sun. It is surprisingly clean, with no rubbish lying about to ruin the heavenly atmosphere. The beach is long and thus big enough for the crowd to be spread out and therefore make it seem like there are few people around you. Several-storey hotels are still not ruining the scene, instead, small stone and wooden bungalows brings a cosiness to the place, and are practically placed on the sand of the beach. A forest of tall, green palm-trees in the background, hiding the hotels’ bungalows, gives the beach an exotic twist, and together with the blue colour of the ocean and the whiteness of the sand it is a picturesque beautiful sight.
In the early mornings before sunrise you can spot people on long walks, and doing yoga. The daytime is hot and thus mostly spent swimming, napping in the shade or reading. Snorkelling is another option, despite Ngwe Saung not having the most astonishing coral reef, though several colourful fish can be spotted around the small island in the southern end of the beach, Lovers Island. Every night you can watch a beautiful sunset, which paints the sky in gorgeous rosy colours, and afterwards the sky and the ocean becomes one dark mass. The only thing that makes this dark expanse come alive is the sound of the roaring waves, which is an amazing and peaceful sound in the chilly night-weather.
Ngwe Saung is an amazing and easy option for a relaxing weekend holiday, but beware it might be a hard place to leave.