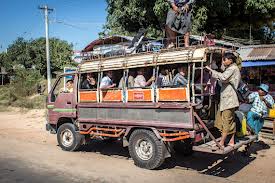 In the UK I wouldn’t dream of ferrying myself about in taxis, so why do I here? Especially with inflation as it is, it feels like the price of taxi’s is going up daily. A few weeks ago I decided to start taking the bus, after the initial kerfuffle of not knowing where to pick it up, what number I needed and standing in the middle of the mayhem faced with blank faces when saying Hledan and pointing at a bus (embarrassingly I have to admit that my Burmese is still non-existent, so all I could muster was the name of my destination, but even that was hard for most of the group surrounding me to understand…). After about 5 minutes a bus came trundling along and the cluster of people waiting along the road rose into an excited gaggle shouting at me to get on the bus. I was ushered on much to the amazement of the passengers, who, after getting over the shock of seeing a foreigner on the bus relished the opportunity to practice their English. The beauty of putting yourself in a chaotic situations in Burma, is that the people are all so lovely, so will go out there way to help you and make conversation which is more often than not interspersed with a cacophony of nervous giggles. I spent the 40 minute journey back to Hledan laughing with my fellow passengers at the fact neither of us had a clue what the other was saying. As we were being bounced around the bus It started to feel like the it was jolting to the rhythm of the chatter.

There are more than 40 numbered city bus routes, which include a multitude of different kinds of buses. From pick-up trucks, which you see people hanging off the back clinging on for dear life, to the Japanese and Korean buses equipped with air-con, which tend to connect the townships. The fare varies from 20 kyat to 200kyat depending on what type of bus you opt for.

From what I’ve gathered most buses seem to leave from Sule Pagoda, so if your downtown you should be able to get to most places from there just go down and ask people how to get to your destination. If your not downtown, in my experience if you go to a bus stop and ask the congregation waiting, they’ll be able to tell you which number to get there, or will direct you to the nearest bus stop where a bus you could get will pass.

Get delicious desserts delivered to your door in Yangon