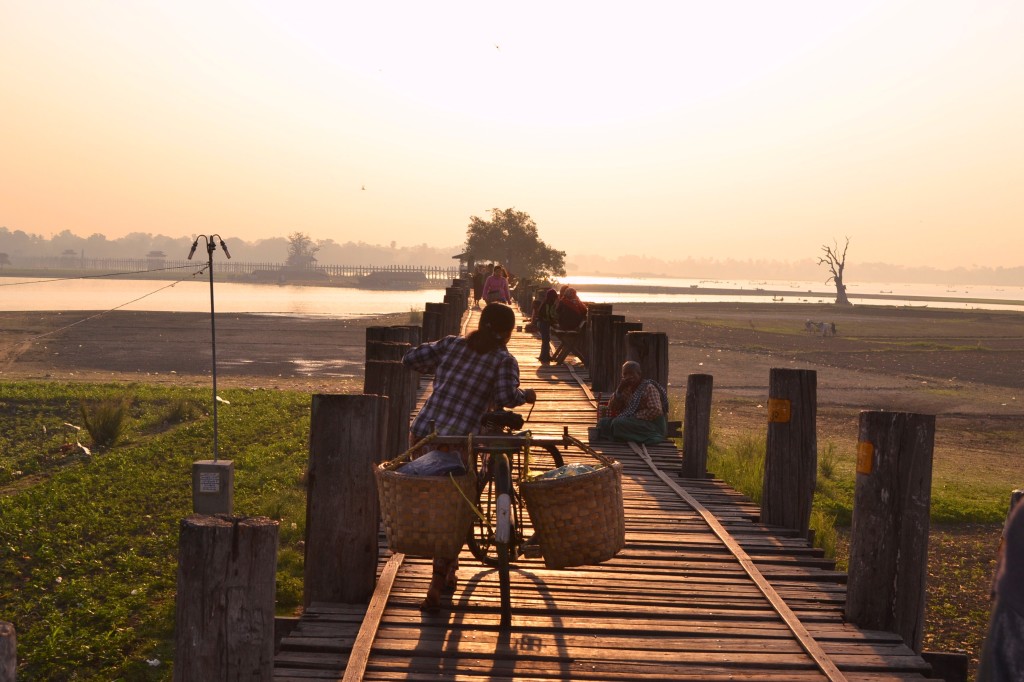 I visited U Bein bridge a dawn, something I strongly suggest you do whilst in Mandalay. At this early hour you manage to escape the flocks of tourists that appear at sunset. U Bein is the longest teak bridge in the world. At 5.30 in the morning it is was practically deserted bar a couple of oxen having an early morning dip ahead of their gruelling day, and a handful of fishermen already on the water on a hunt for some unsuspecting fish. As we started slowly ambling across, basking in the tranquillity having escaped the noise and dust of Mandalay , the occasional bicycle would come by laden with lettuces, long stem broccoli, Thai basil, cauliflowers bobbing along secured by a piece of string tied round it’s stalk and many more fresh vegetables.

Before the sun makes itself visible it sends warnings of its arrival by illuminating the sky an apricot yellow which diffuses down to a soft peach which in turn drips into a delicate rose petal pink with an almost tie-dye effect. As the sun slowly creeps its way up the colours are intensified till reaching a peak at which point the originally pinky peach sky metamorphosis’s into a blue whilst the yellow on the edge of the horizon holds its ground a little longer till the all encompassing blue wins the battle and captures the sky till nightfall where a different display of colours battle it out.

As the sun started to light up the morning the bridge became increasingly busier, with groups of ladies balancing large bamboo circular trays on their heads replete with blossoming flowers, going to be sold at the entrance of one of the thousands of pagodas around Mandalay to then be laid as offerings to Buddha. Others would walk past opting for an alternative way of transporting goods to the market, this time balancing 2 baskets either end of a bamboo pole which lay across their shoulders. Monks also form part of the myriad of people crossing the bridge, making their way to the monastery on the other side of the lake, with some stopping off along the way in one of the covered huts on the bridge to sit down and start meditating in the direction of the rising sun.

On the other side of the lake lies a sleepy little town with little more than a few tea shops, a monastery and a handful of houses. Stop for breakfast at one of the tea shops and enjoy the view of the village waking from your little plastic stool designed for a 2 year old. We were served an espresso sized cup of tea drowning in condensed milk, alongside a delicious deep-fried sweet dough. If you’re feeling a little adventurous you could opt for bbq rat, sparrows, or even squirrels which are piled up next to a range of other unidentifiable meats, at a neighbouring stall.

Beneath the bridge on the one side are fields where Betel nut is grown, the verdant green of their leaves being illuminated by the first rays. The lake that lies under the other side of the bridge by this point has become sprinkled with fishing boats which continue to grow in number as the morning progresses, and by 8am there must be over 100 boats out. There is a wonderful moment every 20 minutes or so when they throw their fishing nets over board, twice the length of the boat over the side, creating a majestic motion of the net stretching its arms out and slowly sinking into the water, its white threads glinting before being engulfed by the waters of the Taungthaman lake. When they come to pull out this giant net only a sad looking couple of fish seem to get caught each time, and then this impressive act is repeated once again. We were informed that the fishermen have to pay a hefty 8000 kyat to the government daily, a large sum considering a kilo of fish will fetch a mere 2000 kyat at market.

By this point the sun had majestically started to appear over the palm trees on the horizon, glowing like a florescent pinky-orange bulb eager to start its daily dance across the sky. A foray of birds welcomed the sun with their excited song.